In this article, we will discuss the implementation of the Elman Network or Simple Recurrent Network (SRN) [1],[2] in WEKA. The implementation of Elman NN in WEKA is actually an extension to the already implemented Multilayer Perceptron (MLP) algorithm [3], so we first study MLP and it’s training algorithm, continuing with the study of Elman NN and its implementation in WEKA based on our previous article on extending WEKA [4].

In a feedforward network there is no feedback of the output of a neuron as input to another neuron in which it depends. For a given input

all the required calculations in order to compute the network’s output take place in the same direction: from input to output neurons [5].

A Multilayer Perceptron (MLP) is a feedforward network in which the neurons are organized in layers. An example of an MLP network is shown in Figure 1. The main characteristic of this type of networks is that there are no connections between the neurons on the same layer. There is one input layer, one output and zero or more hidden layers. Usually all connections begin in a neuron on a layer and end to a neuron on the next layer. Finally, the nodes on the input layer do not perform any calculation, but they simply output their inputs. [5] 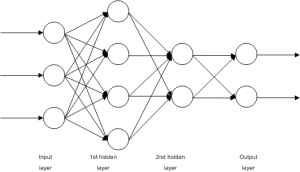 The error backpropagation algorithm for the training of MLP networks was introduced at 1986 in a paper by Rumelhart, Hinton and Williams [6].

In this algorithm a set of training examples

are presented to the network, where

is the target output. The network computes its output

the vector containing all weights and biases of the network. [5]

We can now define the square of error function [5] as follows:

which is a sum of square errors per example

and thus is bounded from below by 0, which occurs in case of perfect training. With

is represented the square error per example

MLP’s training is implemented by updating the weight vector

in order to minimize the square error

, and for every repetition

has the greatest rate of decrease. [5]

The training is a two-pass transmission through the layers of the networks: a forward propagation and a back propagation as it is depicted in Figure 2. [1] 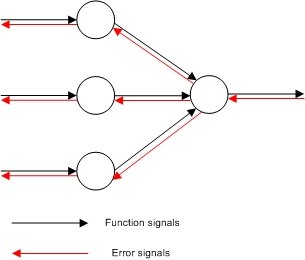 Figure 2: The directions of two basic signal flows in a multilayer perceptron.

During the forward pass, the output values for all network’s nodes are calculated and stored. These values are also called function signals, their directions are from input to output and at the end is produced a set of outputs

In order to describe the calculations that take place during the training of the MLP network, we need to define the symbols for the various values. So, we define [5] the

-th neuron on the

is the input vector, then for the input layer’s neurons is

is the output layer, then the network’s output would be

Given an MLP network with

, the output layer is layer

. So, the computation for the output vector

At this point the error back propagation can be applied as follows: [5]

Error calculations for the output neurons

Backpropagation of the errors to the first hidden layer’s neurons

Calculation of the error’s

partial derivatives of the weights

is the square error per example, then, according to the equation (2), equation (8) can be written as:

and it is not necessary to store the

values during the forward pass. This is true also for the output layer’s neurons. So, if their activation function is the logistic, then:

and if it is linear:

The above descriptions can be summarized to the following algorithm:

In equation 13 can be added an extra quantity as in equation 14 below:

This quantity is called momentum term and the constant

momentum constant. Momentum introduces to the network a kind of memory related to the previous values of

. So we can achieve a stabilizing effect and prevent the phenomenon of oscillations around the value of the minimum error. [5]

The error backpropagation algorithm can be used to solve a wide range of problems. Feedforward networks, however, can only achieve a static mapping of the input space to the output space. In order to be able to model dynamic systems such as the human’s brain, we need to develop a network that is able to store internal states. [7]

These types of networks are called Recurrent Neural Networks (RNN) and their main characteristic is the internal feedback or time-delayed connections. [7] An architecture of RNN is the Simple Recurrent Network (SRN) or Elman Network (Figure 3). [1] [8]

Figure 3: Architecture of an Elman Network

Assuming that we have a sequence of input vectors and a clock to synchronize the inputs, then it will take place the following process: The context units are initialized at 0.5. In a given time

During the training procedure of an Elman network, similar to the case of an MLP training, the network’s output is compared with the target output and the square error is used to update the network’s weights according to the error backpropagation algorithm [6] with the exception that the values of recurrent connections’ weights are constant to 1.0 [8].

3. Implementation of Elman network in WEKA

Elman network implementation is based in the MLP algorithm (already existend in WEKA), which was sligthly modified in some parts like it’s general architecture and the initialization phase. The training algorithm remained the same with the addition of a step which copies the values of the hidden nodes to the context units. 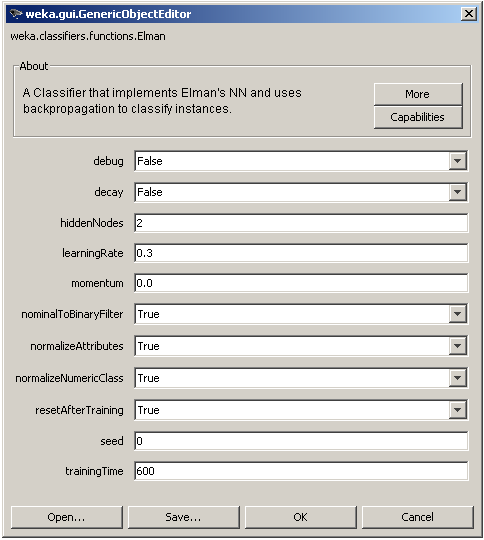 The algorithm’s parameters that can be modified by the user, as shown in Figure 4. above, training parameters such as the learning rate

(momentum) and the number of training epochs

(trainingTime), architectural parameters such as the number of hidden nodes, an option to normalize the input vector (normalizeAttributes) and the output numeric value (normalizeNumericClass) and also an option to transform nominal input values to binary (nominalToBinaryFilter). The seed parameter is used to initialize a random number generator for the initial randomization of the network’s weights. Finally, the parameter resetAfterTraining defines if the internal state will be reseted or not after the training is complete.

In this article, we saw the differences between a common type of feedforwand network (MLP) and a recurrent network (Elman or SRN). We saw also how the elman neural network can be implemented in WEKA by modifying the code of the existing MLP network. The source code of the current Elman implementation for WEKA can be found at Elman.zip is not included as an official package in WEKA as it cannot be integrated well in WEKA due to the lack of support for classifiers that contain an internal state. On the other hand it can be used in custom java code and it is already been used with sucess in my own BSc Thesis [9].

21 thoughts on “Implementation of Elman Recurrent Neural Network in WEKA”