In a previous article, we shown that by using WEKA a researcher can easily implement her own algorithms without other technical concernings like binding an algorithm with a GUI or even loading the data from a file/database, as these tasks and many others are handled transparently by the WEKA framework. [1]

In this article we will study Competitive Learning Networks and more especially the Learning Vector Quantization and Self-Organizing Maps architectures. Finally we will describe the implementation of these networks for WEKA. [2]

Competitive Learning is usually implemented with Neural Networks that contain a hidden layer which is commonly called as “competitive layer” (see Figure 1). Every competitive neuron

is described by a vector of weights

and calculates the similarity measure between the input data 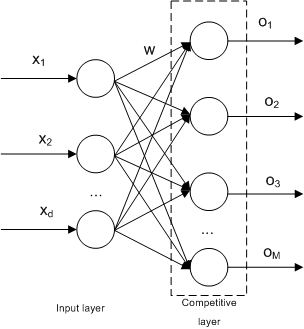 and all the other competitive neuron set their output

between the input vector

The algorithm for a Learning Vector Quantization can be easily implemented by utilizing a neural network  with a competive layer containing a number of competitive neurons equal with the number of clusters. Every competive neuron i corresponds to a cluster and its weight vector

corresponds to centroid of the cluster

. In each repetition or epoch a vector

is presented as input to the network, the distances from each centroid

are calcualeted and finally the winner neuron

with the the minimum value of Euclidean distance

is selected.  The final step is to update the weight vectors by “moving” the winner’s neuron centroid

“closer” to the input vector

.  The amount of the “moving” depends on a η parameter (learning rate).

The Self-Organizing Maps (SOM) is another very common competitive learning alrgorithm that was introduced by Τ. Kohonen [4] in an attempt to model a self-organization process human’s  brain.

A SOM network consists of the input layer and a layer containing the competitive neurons which are laid out in a 2 dimensional lattice (see Figure 2) [5]. Each of these neurons are is described by a vector of weights

. When an input vector

is presented to the network, the lattice’s neurons compete and the winner

is seletcted with its weight vector

having the most similarity with

. So, one can argue that a SOM network is a mapping function of a d-dimensional input

to a 2-dimensional lattice

The algorithm starts by initializing the weights vectors

to small random values produced by a random number generator. After that step, there three main stages, which can be summarized as follows [3], [5]

A function that satisfies the above criteria is the Gauss function:

according to the following formula: [5]

is  the effective width’s initial value and

a constant chosen by the network’s designer. [5]

Finally, given a weights vector

, one can easily calculate the new vector for epoch

As we can see in the last formula, the learning rate

is also time (epoch) depended. To be more specific, the learning rate should be initialized at a value

and decrease exponentially with the increase of time (epoch) counter

is another constant chosen by the network’s designer.

The procedures described above may further be divided into two phases: [4]

should initially contain almost all neurons in the lattice with the center being the winner neuron and gradually shrink to contain a few neurons or the winner neuron only. In case of a 2-dimensional lattice, we can set the initial effective width’s value

By summarizing the above descriptions, SOM’s learning algorithm is as follows [3]

2. Implementation of LVQ and SOM networks in WEKA

The SOM Network was implemented according to the description in paragraph 1.3. For the calculation of the learning rate’s and effective width’s values in the ordering phase, in each epoch where used the formulas (5) and (2) accordingly with parameter values

the number of epoca in the ordering phase,

the initial learning rate and

the initial effective width which is given by the following formula

the width and height accordingly of the 2-dimensional lattice.

In the convergence phase the learning rate’s and effective width’s values remain constant equal to 0.01 and 0.0001 accordingly.

The user adjusted parameters are shown in Figure 3. The 2 dimensions of the lattice can be set via the height and width parameters, the number of epochs for each phase via the orderingEpochs and convergenceEpochs parameters and the initial learning rate via the learningRate parameter. There is also an option for input normalization (normalizeAttributes) and finally the calcStats option for the calculation of some useful information about each cluster as shown in Figure 4. 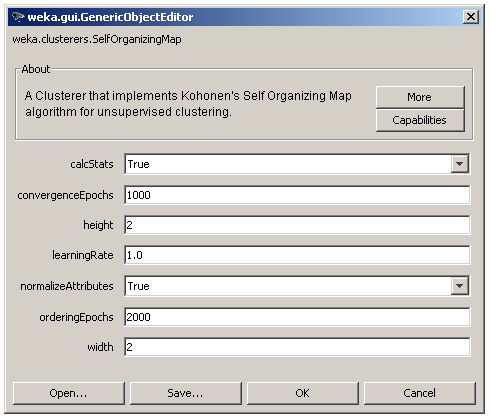 The LVQ Network was implemented according to the description in paragraph 1.2 based on the source code of SOM network as it was described previously. The code needed only some minor changes with the most important of them being the update of only the winning neuron’s weights. Furthermore, the learning rate remains constant during all training epochs and finally the competitive layer has only one dimension. In other words, the number of clusters is defined with one parameter in contrast with the SOM’s width x height parameters. 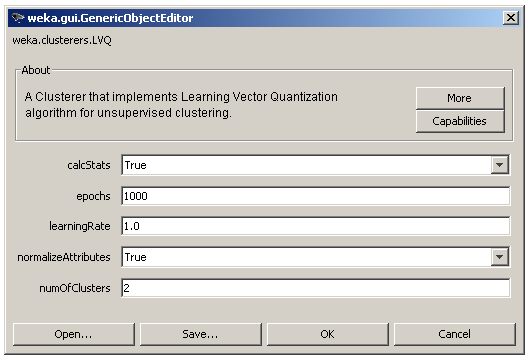 The user adjusted parameters are shown in Figure 5 and contain the learning rate (learningRate), the number of clusters (numOfClusters) and the number of epochs (epochs). Finally, the user can still choose to normalize the input data and to enable the statistics calculations as in the case of SOM.

In this article were described two common competitive algorithms. Based on these descriptions the algorithms were implemented for the WEKA framework and they are distributed as official packages that can be installed automatically through WEKA’s package management system [6].

19 thoughts on “Implementation of Competitive Learning Networks for WEKA”