In this article we will present an Application for interacting with an android wear smartwatch through wrist gestures. As smartwatches are typically worn in the wrist, one would expect a hands-free way of interaction, leaving the other hand free for other activities. Android wear also offers a voice activated interaction, however this wouldn’t be a solution in several social situations (i.e. during a business conference) or in situations in which users require their own privacy.

Such application could greatly improve the accessibility of smartwatches for one-handed users, who may be either amputees or users who are unable to use both hands, as in the case of cerebral palsy which usually is combined with a speech impairment as well, turning the smartwatch to a completely useless device.

The author of this article falls in this last case of users, so this article is motivated by the author’s self interest and is being publicized in hope that it will benefit other people as well.

Literature in the field of hands-free interaction with a wrist wearable device, offer many examples, such as the Gesturewrist system which allow users to interact with wearable or nearby computers by using gesture-based commands [1]. Guo and Paek explored two tilt-based interaction techniques for menu selection and navigation: AnglePoint, which directly maps the position of a virtual pointer to the tilt angle of the smartwatch, and ObjectPoint, which objectifies the underlying virtual pointer as an object imbued with a physics model [2]. Xu et al. showed that motion energy measured at the smartwatch is sufficient to uniquely identify user’s hand and finger gestures [3]. Gong et al. proposed and studied a new input modality, WristWhirl, that uses the wrist as an always-available joystick to perform one-handed continuous input on smartwatches [4]. In Chen et al.’s Swipeboard, characters are entered with two swipes; the first swipe specifies the region where the character is located, and the second swipe specifies the character within that region [5]. Furthermore, they also created ZoomBoard which uses iterative zooming to enlarge otherwise impossibly tiny keys to comfortable size [6]. Finally, Wen et al. in Serendipity demonstrated the potential to distinguish 5 fine-motor gestures like pinching, tapping and rubbing fingers using integrated motion sensors (accelerometer and gyroscope) in off-the-shelf smartwatches [7].

Our initial intuition suggested that data from the smartwatch’s accelerometer and/or gyroscope would be proved to provide sufficient data and after some preliminary tests, we concluded that Android’s linear acceleration sensor [12] was enough as we will show in the next sections.

In order to record data we created the required smartwatch and desktop application. Both applications are available in the project’s github repository [13]. The SensorData Accessibility Service runs in the smartwatch and constantly sent linear accelerometer’s data to an HTTP server which is provided by the DataProcess project [13].

Class gr.ictpro.jsalatas.gestures.ui.recorddata.RecordDataUI in that projects, starts an embedded HTTP Server which receives incoming data from the smartwatch, stores these in a SQLite Database and also visualizes it in the screen as a form of visible feedback to the user (Figure 2). 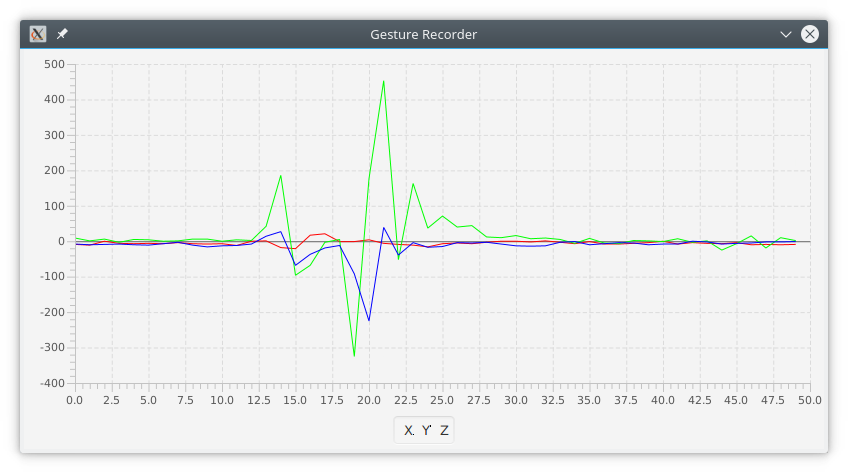 A total of 156.730 linear accelerometer’s readings where saved as the author of this article performed each of the gesture above several times, giving enough space between each gesture in order to be able to distinguish it.

Having the raw data, our first task was to go through the data and manually tag the segments that a gesture was performed. The DataProcess project [13] contains the class gr.ictpro.jsalatas.
gestures.ui.classify.ClassifyUI which brings up a GUI with tools necessary to pan, zoom in the chart and and tag segments of data with a particular gesture (Figure 3).

Figure 3: The Classification UI, showing the tagging of a series of Select Next gestures

Class gr.ictpro.jsalatas.gestures.export.Csv contains the necessary code to export a series of a tagged vectors

to a CSV file that could then be used as input data for the training of the model. A rolling window (

vectors plus one gesture class (

) that characterized the whole vector.

Having these instances, we switch to the python project named train [13][13.a], which is based on tensorflow [14] and keras [15], in order to build a Sequential model that recognizes such gestures. In general, the project contains all the necessary code in order to load the previously generated CSV file, split it into training and validation set and run a genetic algorithm with the objective of finding the optimal neural network parameters (in particular number of layer/neurons, activation functions, training algorithm and number of epochs). We also keep track of the recognition’s accuracy (percent). As an additional note, the input dataset is highly imbalanced with a dominant “no gesture” (0) output and needs to be weighted which is accounted by the relevant class weights.

We executed the genetic algorithm for 20 generations, having a population of 25 individual networks, and for the parameters shown in Table 1:

The best network after 20 generations had the parameters and performance as shown in the following Tables:

Having the model we converted it to a tensorflow graph and freeze it to a protobuf file then can be used in java code for the actual recognition.

In project DataProject [13], class gr.ictpro.jsalatas.gestures.ui.predictions.
PredictionsUI contains the necessary code to use that protobuf model and visualize the predictions along with the actual class side by side with the

vectors as show in Figure 4, where in the lower chart blue is the actual class and red the predicted. 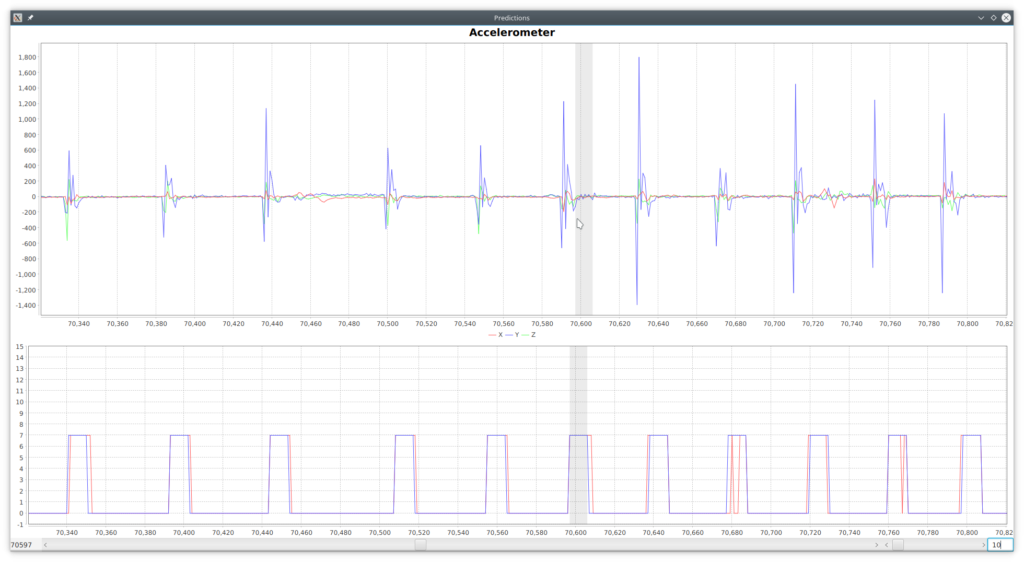 As expected, a gesture is recognized after completed and it can can be recognized in a windows equal to 10 (

). As seen in the Confusion Matrix (Table 4), there are many input

vectors marked as ‘no gesture’ (0) which are recognized as a particular gesture and, on the opposite, there are many of as well which are not recognized. Figure 4 above provides several examples for such cases, which seem to be the majority through the whole dataset. There are however some cases of false positives such as the ones depicted in Figure 5. 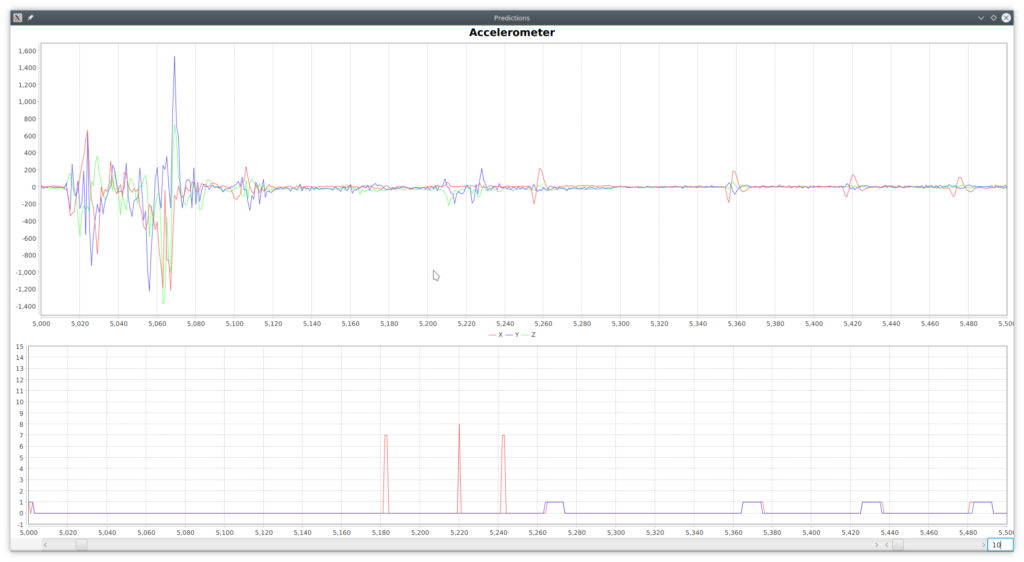 ) predictions (State) and expecting to have a minimum number of appearances (Recognition Accuracy) for a particular non-zero class.

As mentioned, the HandsFree Wear application consists of an Accessibility service which recognizes the wrist gestures performed by the users and taking the relevant actions as depicted in Figure 6. 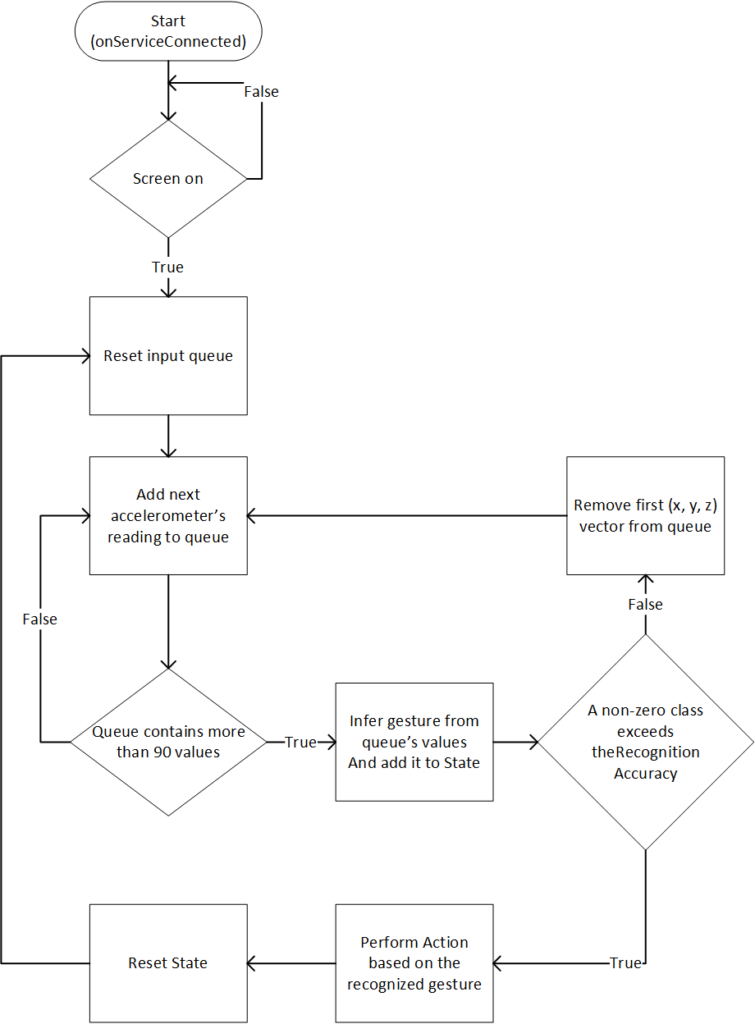 The HandsFree Wear application is available as beta version in Google’s play store [16].

The application is currently used and evaluated by the author of this article in a daily basis, during the last 2-3 weeks in a Ticwatch E (Android 7.1.1 and Android Wear 2.8.0). The device’s hardware is more than efficient and it consumes about 1% of the battery’s capacity per hour (based on the author’s usage).

In general, with the exception of the issues described in the next section, the device was 100% accessible: Through the wrist gestures described previously, users can go through their notifications and dismiss them or open and interact with them, like reply to an email or instant message with an emoticon or a predefined phrase, start any application from the smartwatch’s launcher and interact with it, go through the device’s settings and modify these, etc.

At the moment maybe the most important issue is Google’s Input Methods for wearable devices (Figure 7), which is still an open research field as we saw in the Swipeboard [5] and Zoomboard [6] systems. 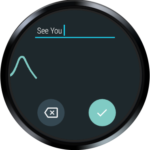 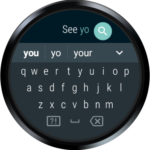 Another issue lies in the methodology we used to collect data. The trained model is unable to recognize any gesture while the user is walking. It can however recognize gestures (although at a lower, unknown accuracy) if the user is inside a car moving with a relative steady speed.

Moving to specific applications, it seems that the watch-face’s compilations (Figure 8), don’t seem to advertise the actions the support and most importantly ACTION_CLICK, and thus turning them non selectable through Select Next / Select Previous wrist gestures. 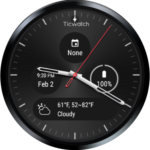 Finally, the Google Maps application seem to have two issues. The buttons overlay in map canvas seem to hide after some time of inactivity, giving full visibility to the map (Figure 9) and eventually making them inaccessible in to HandsFree Wear service. Also the items in “Around Here” list (Figure 10) don’t seem to advertise the ACTION_CLICK method, and thus turning them non selectable through Select Next / Select Previous wrist gestures. 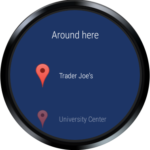 As a general conclusion of our study, it seem that the created HandsFree Wear application is usable for most common task on a daily basis, at least from the author’s perspective. It would be interesting to have feedback from other users as well and this is the primary reason that we are making it available either as a ready to use application through Google Play Store [16] or in the form of its source code [13]. It would be also interested evaluate the model’s performance in recognizing wrist gestures that are performed from other people. Our first impression here is that the model wouldn’t perform that well, but users should be able to learn how to perform the gestures in a way recognized by the model.

Regarding the input methods issue, we are planning to further investigate it, and preferably create an accessible (in the HandsFree Wear application’s context) input method with an initial idea to create and evaluate a phonepad like UI with T9 capabilities.

Finally, regarding the issues in Google Maps application, after further investigating it, we plan to compile a bug report and communicate with google.

As a final remark, it is the author’s impression that in the IoT era we may need to redefine what accessibility means, giving the fact that apparently most the current research is focused towards voice-user interfaces, which are not suitable for all users. We believe that we need to make sure that either speech recognition works for all users and in a language that they understand, or offer alternative input methods, that may even not require voice or limp use at all like [17].

[2] Guo, A. and Paek, T., 2016, September. Exploring tilt for no-touch, wrist-only interactions on smartwatches. In Proceedings of the 18th International Conference on Human-Computer Interaction with Mobile Devices and Services (pp. 17-28). ACM.

[13.a] Let’s evolve a neural network with a genetic algorithm, https://blog.coast.ai/lets-evolve-a-neural-network-with-a-genetic-algorithm-code-included-8809bece164, last accessed: 02/03/2018